Rue Cler is named after the market street where the parents of chef/owners John and Nathan Vandergrift lived in the 7th Arrondissement of Paris. Established in October of 2006, Rue Cler was the first fine dining establishment to open in Downtown Durham for decades, and the first French restaurant ever to cater to Downtown. We are proud to be pioneers of what Food & Wine magazine has dubbed the foodiest small town in America. 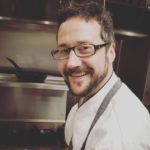 Whitney attended the Western Culinary Institute in Portland, Oregon. He worked in San Diego, Portland, and Atlanta, as well as in the Boone area. Upon returning to the Triangle, he worked for Jean Paul Fontaine at Bistro 607 in Raleigh, and then became executive chef at J. Betski’s in 2006. He moved to Vin Rouge as executive chef in 2011, and opened Oval Park Grille in 2014. He accepted his current position at Rue Cler in April of 2017, ready to dive back into his love of French food and wine, confident in the high potential of what could be accomplished here. Thus far, Chef Whitney has wowed staff and guests alike with his wealth of food knowledge, skillful execution, and warmth of personality.